Earthsiege 2 is a much-improved sequel to Dynamix/Sierra's Earthsiege, and marks the company's third entrant into the giant robots genre (after Battledrome and EarthsiegeSilent Thunder). As in the first game, the plot is quite mundane: a race of intelligent robots have revolted against their human creators and are trying to kill of the human race and rule the world. Yeah, sure... bring on the game, please.

Fortunately, gameplay in Earthsiege 2 is excellent, especially with a joystick, but even with only a keyboard and mouse you can still get the hang of it pretty quickly. Most missions still involve killing enemy robots and destroying their bases, but this time the terrain is much more varied, with hills, snow, lava, and buildings to add to the realism. Another great addition is the Razor, an air-capable HERC with solid flight-sim controls (although it has limited altitude). Like in the first game, players can outfit and customize their HERC units between battles. The action is often fast and furious, and the game has one of the best explosion graphics I have ever seen.

Overall, Earthsiege 2 is a solid giant robots game that could easily give MechWarrior 2 a run for its money, with cleaner graphics and more challenging and varied gameplay. Arguably, the lack of official FASA license hurts the game's sales quite a bit (although the plot and HERC designs are clearly rip-offs). Whatever the reason, the game's 50-plus missions and strong gameplay will keep fans of Mechwarrior 2 hooked for hours on end. Highly recommended! 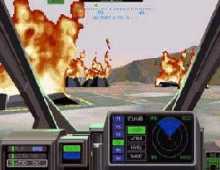