One of the games I liked most in my history as a gamer, Earth Siege, first chapter of a long lived mech simulators saga, and one of the best game of that period.

The story's quite simple, a supercomputer started an uprising against its old human masters, and you(and your squad mates)are the ones bound to teach it(him?) a lesson he'll never forget(he won't forget because he'll be "dead", of course ;-) The game is very complex, you start with low technologies, and you have to steal the prototipes from the cybrid army to actually have them, and as you can easily guess, it's not a good thing to find oneselves fighting against a Nuclear warhead equipped walking tank with a bee carrying 200GW lasers... of course when you too will have some REAL weapon... well... you are going to rock the world, and not only that.

As i said above, this is a simulator, a serious thing, every section of your mech will be linked to sub-systems and, of course, to the "body" of the mech itself, this means that if you snipe the enemy, you'll be able to take out only the legs of the incoming mechs, WITHOUT destroying them, so that your engineers will be able to recover more alloy to build new weaponry or to repair your robot; another example of the simulation qualities of this game is the way you will use the radar: you got two functions, active and passive, and you'll have to use them wisely to avoid detection while actually DETECTING your enemy.

Technically the game is really good, it has true 3D graphics, and very realistic sounds, a real masterpiece this one, really worth the time requested for the download.

Earthsiege is one of the best 3D giant-robot games ever released that sadly faded into oblivion beside the better-hyped and (deservedly) higher-rated Mechwarrior 2 from Activision. Still and even though it doesn't feature all the famous mechs from FASA's Battletech universe, with excellent graphics and good one-player campaign mode. All in all, it's an excellent 3D action game with an intriguing plot, many types of mechs to control and fight, and furious cockpit action. If you like the game, also check out the expansion pack, which is still sold by CrazyApe.com here! 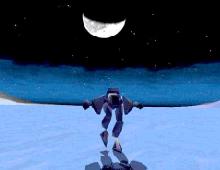 People who downloaded this game have also downloaded:
Earth Siege 2, Mechwarrior, G-Nome, House of the Dead 2, The, Titans of Steel