Lemming Ball Z is one of the best and most imaginative blends of two blockbuster games. Who would imagine that pitting the cuddly lemmings from Psygnosis' classic puzzle series against each other and arm them with Dragon Ball Z-style superpowers will be so much fun? The idea is simple: defeat your fellow lemmings in one-on-one combat to the death using Dragon Ball Z powers such as Kaoken, Kamehameha, and many more. Like the heros in DBZ, you can become a "Super Saiya" - a "superhero" lemming with a whole new level of power. Most attacks from DBZ are well executed: for instance, Kaoken slows down time around you, and Teleport lets you instantly teleport away for a few precious seconds. Also like in DBZ, most fights in LBZ involves giant "ki-ball" attacks and furious in-the-air duels in which neither combatant touches the ground. Destructible terrain, huge explosions, and smooth animations make the game fun and addictive, especially in network mode against other human players. Whether or not you are a DBZ fan, Lemming Ball Z will definitely entertain you for hours on end if you like fighting games. There is a strange sense of satisfaction in seeing cuddly lemmings blast each other away - and level mountains in the process. 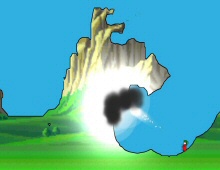 People who downloaded this game have also downloaded:
Lemmings 2: The Tribes, Lemmings Chronicles, The (a.k.a. All New World of Lemmings), 3D Lemmings, Lemmings for Windows 95, Lemmings