Yet another jaw-dropping, drop-dead gorgeous 3D shooter from Japan, GunViper takes the freeware 'scene' to the next level with true 3D weapons. You no longer fire flat, 2D laser beams, but full 3D bullets and rockets that spin towards their targets. Very pretty. There are dozens of enemy types, all of which are very well-designed and have their own attack and fying patterns. Some of these ships remind me of ships in Gandam and Macross anime - perhaps the author's inspirations. Action game veterans may find the first few stages of the game too easy on the normal level, but they can change the difficulty level to "expert" for more challenge. Even on "kids" (the easiest) level, the game gets considerably more difficult in the later stages. One nice touch is that you can dock with the mother ship during each stage to refit your ship with different weapons (by buying them with blue, green, and pink cubes collected from dying enemies). One minor quibble I have with the game is that the illusion of 3D depth could be better - my ship sometimes run into large enemy ships I thought were flying below me (or vice versa). A 3D radar like the one in Homeworld would have helped. Still, even in this early (version 0.40) pre-release stage, GunViper has all the qualities of a great shooter, as well as the longevity to last more than several hours of your time. Future releases of the game will replace this download and will be announced on the News page. Recommended! 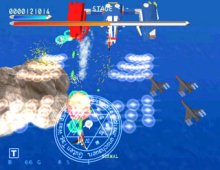