Valkyrie Fight and its sequel Valkyrie Fight Tag are two superb and highly underrated 2D fighting games based on Tri-Ace's popular Valkyrie Profile series on the PSX and PS2. VF and VFT are "Doujinshi" games - i.e. an independently developed game based on another company's creation. In terms of quality, they rivals Queen of Hearts, Party's Breaker, and Melty Blood - three popular Doujinshi fighting game series - but it is much less known. You control various characters from Valkyrie Profile game, the designs of whom are inspired by Norse myths. The style is "SD" (stumpy-head) anime characters, but they are much more detailed and varied than in your average fighting game. I especially like the fact that there are three levels of special attacks for each characters: light, medium, and fierce. Naturally, the fierce attacks use up much more energy than light ones. The "Team Attack" mode, designed for 2 players to play co-operatively, is also a lot of fun. All the play modes you'd expect in a 2D fighting game are here: Arcade, VS, and Survival.

Numerous combos, fluid animations, amazing special effects, and the huge amount of secrets to discover are the highlights of these two excellent games. As you might expect from the sequel, VFT is the bigger and better game of the two. Released only in Japan by amaginZ, the developer is now defunct, pushing the games into 'abandonware' status before its time. If you like 2D fighting games, you will definitely enjoy this rare game duo. 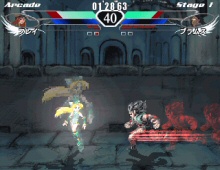