Mogura Reverse is another cute horizontal shooter from Japan, where more and more freeware games achieve - and in some cases surpass - the quality of commercial games. Gendo Ikari's review for Gamehippo.com explains why SHMUP fans should take a look at this game:

"Yet another wacky Japanese shooter, following the tradition of Parodius. This time the "ship" is a mole (mogura, in Japanese) with a jet pack mounted on the back, and the heroic task of... Taking back all the strawberries from the aliens. Right. Indeed, fruit plays a big role in Mogura Reverse: watermelons act as power-ups for the main weapon, grapes must be taken to get the special weapons, and strawberries left by enemies are the ammo of special weapons.

The main shot can be upgraded four times, and is quite powerful and widespread at the maximum level. The mole can generate a force field but it has limited energy at disposal, shown by the little green bar; to recharge, it mustn't be used for some instants. It can destroy little enemy bullets but, obviously, not the big ones, though it can still protect the mole as long as it is active. When you take the grapes, a special weapon is assigned at random; weapons range from a thunderstorm (acting like a smart bomb) to heat-seeking missiles with mole faces. Each consumes a different quantity of strawberries and, as happens often in these games, have its advantages and disadvantages. Even with no special weapons taken, you always have a default one: a fireball of medium power, but capable of going through obstacles in the scenario.

No selectable difficulty levels here, but there are two options to spice up the gameplay: 1) When destroyed, enemies release six bullets in a radial pattern. This option is turned off by default. 2) Strawberries left by enemies are collected automatically. This option is turned on by default. There are some options to choose as you start a new game, too: starting from the first level (first choice) or from the last you reached in the previous game (second choice), and then choosing between Turbo and Normal Speed.

As usual in demented shooting games, graphics are drawn in typical Anime style. Not that they are bad to see (unless you hate such cute & cheesy style, obviously), given the bright colors, the parallax scrolling and many little details, like the falling stars in the last section of level 2. At first, enemies are mostly animals or strange, unclassifiable creatures, but as you progress, serious-looking technological enemies will start to appear more and more frequently, generating a funny contrast. I must point out that the mechanical design is quite detailed (look at the spaceships on the background of level 3). The design of the third level is definitely inspired to Parodius (which, in turn, was Konami's self-spoof of Gradius), since you have to fly around a big spaceship, destroy its weapons one by one, and finally confront the main body. The background music is very good, not surprisingly since the musician is quite experienced; but there are only four songs, and the mainly used one will probably get old after a while.

There are five levels in Mogura Reverse. The overall difficulty is about average, but low in some points. You will probably lose many lives in some passages of the game, but nothing than cannot be solved with experience - and since the main weapon is downgraded only a level when you lose a life, if situation degrades too fast (read: you find yourself with the starting pea-shooter), it means you must work to refine your skills. Better to turn on the first option I mentioned earlier: the challenge will get considerably better, especially if you don't want to resume playing from the last level reached. I had a lot of fun this way. And it must not be forgotten that this game offers a simultaneous two-player mode, a thing many other arcade-style freeware shooters lack. I think the player 2's keyboard controls are badly conceived, but still, this is a big bonus for the value of Mogura Reverse, definitely the best of its genre I played since a while." 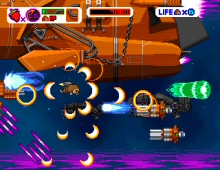