Marathon 2: Durandal is a good PC conversion of the Macintosh FPS blockbuster of the same name. Although the game looks out of date and old-fashioned compared to other FPS'es on the PC during that time (Quake 2, for example), Marathon 2 more than holds its own with excellent gameplay and a good sci-fi plot to boot. The game starts off where the original Marathon (which was never released for the PC, unfortunately) left off. In Marathon, you defeated the aliens called Pfhor who invaded Marathon, a colony ship from Earth en route to Tau Ceti. Similar to System Shock's Shodan, Marathon's AI called Durandal was instrumental in your success. By defeating the Pfhor, you inadvertantly freed Durandal from his confinement within the Marathon, where he promptly took over the Pfhor ship and escape into hyperspace. As Marathon 2 begins, it's been 17 years, and you woke up from cryosleep to discover that Durandal has dragged you along for the ride - as a slave in his private army. Durandal has taken you and a group of the original Tau Ceti colonists to the homeworld of the S'pht, a Pfhor slave race who Durandal liberated and who now loyally serve him as their Messiah. Durandal is searching for the location of a legendary lost tribe of S'pht who may hold the key to his quest for something - and it is your job to find out what Durandal is looking for while you do his bidding.

Although the engine is similar to id's DOOM in most respects (2.5D maps, bitmap sprites instead of polygons), Marathon 2 is much deeper than your average DOOM clone. The game has an inventory system, multiple fire modes for each weapon, allies who help you fight, and different factions of enemies who attack each other. Similar to e-mail transmissions in System Shock, the interesting plot of Marathon 2 unfolds via various computer terminals scattered throughout the levels. At these terminals, you either receive a message from Durandal, or read about the history of the Pfhor and S'pht. There are many alien weapons to find and use, most of which are appropriately strange and interesting. In addition to fun solo play, Marathon 2 also has interesting multiplayer options, although you must buy serial numbers separately from Bungie (no longer available). In multiplayer, up to 8 players can play Tag, King of the Hill, or Kill the guy with the Skull. You can even play the actual campaign game cooperatively with other human players.

With an in-depth and evolving plot, involved gameplay, and excellent play balance, Marathon 2 is a worthy addition to every FPS gamer's collection. 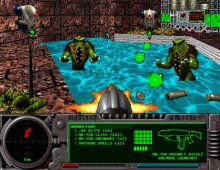