A decent FPS game from Psygnosis that was more successful on the Playstation than PC. The mundane storyline is as follows: the year is 2096 and Earth is polluted and war torn. The remaining colonists have only one wish, to leave the barren planet Earth and rebuild their lives on Extrevius 328, an off world colony that is rumored to be the promised land. You are Joseph B. Tenka from Extrevius 328, a corporate conglomerate manufacturing plant for deadly warriors, known only as Bionoids. Tenka has been listed for transformation into a Bionoid, which is a half man - half droid, and that prospect does not please you at all. So you don a warfare suit and go off on a one-man quest to destroy corporate plans. The story is explained by some rather nice FMV cut scenes throughout the game (unfortunately missing from this CD-rip version).

The gameplay will be familiar to anyone who has played DOOM and countless clones. Set over 20 stages, each level in the game is mission-based, and your mission is given in a nice briefing accompanied by a graphical display of your objectives. The game includes the usual array of high-tech weapons and a variety of Bionoids and other creatures to kill. Level design is average, but the creepy atmosphere is evoked pretty well through sound cues and surprise attacks. All in all, Lifeforce Tenka is an enjoyable and atmospheric shooter that starts out like a DOOM clone, but makes you feel like an episode from Aliens. Worth a look if you are an action fan, but not a Top Dog. 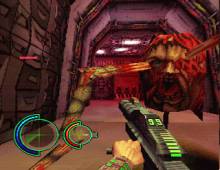