Legend Cave by Japanese freeware designer Deep Blue is a fun RPG/action hybrid similar to Game Arts' Sorcerian. You control an anime hero has he or she (you can choose character at the beginning) numerous fantasy creatures in a vast dungeon. Similar to Zelda, you will gain new skills as your experience increases. There are many potions, weapons, and special items you can collect and store in your inventory for later use. Each character you can play has different attacks, although they are not very different from each other. The levels are well-designed, and there are many kinds of enemies and traps that get in your way. Recommended for anyone who likes Sorcerian, Solomon's Key, or similar games. 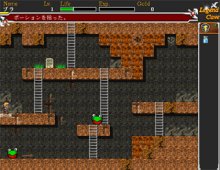