One of the most underrated platformers on the NES, Little Samson is an excellent platformer with top-notch gameplay and a lot of replay value. The plot: Emperor Hans has summoned the four owners of Majestic Bells of Power to embark on a quest to rid the land of the evil Ta-Keed. The four adventurers include Little Samson, Kikira the Dragon Lord, Gamm the Rock Lord, and K.O. the Enchanted Beast (who looks suspiciously like a tiny mouse). After completing a "prologue" level for each character, you can switch between all four of them at almost any point in the game.

With excellent gameplay and charming graphics, Little Samson would already be a good game had it contain only one protagonist. The availability of four characters and how the game utilizes this concept elevates it into the "must-play" status. Fans of The Lost Vikings or Gobliiins will recognize puzzle elements that require you to use the right character. For example, you have to use Gamm to walk on thorns, become KO to go through narrow cracks in the walls, and fly over long distances with Kikira. Each of the four characters has unique attacks and attributes. The game offers excellent replay value aside from having multiple characters: many times there are multiple paths you can take to finish the level, and there are multiple endings. Great level design and imaginative boss monsters round off this fun game. 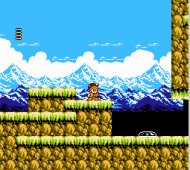 People who downloaded this game have also downloaded:
Mario Forever, Legend Cave, Legend of Shadow (a.k.a. Legend of Kage), Line, The