Legend of Shadow (a.k.a. Legend of Kage)

Legend of Shadow is a fun freeware remake of Legend of Kage, Taito's underrated ninja platformer for the NES. In the crowded field of remakes, LOS still manages to stand out from most of the rest because it is that rarest kind of game: a remake that is better and more fun than the original commercial game. Like in the original Legend of Kage, you play a samurai who must rescue a princess kidnapped by (naturally) evil ninjas. Along the way, you will fight endless waves of ninjas that will throw shurikens and lunge at you from every direction.

Although it is a 2D game, LOS features detailed, multi-layered graphics that effectively convey depth and distance. This makes the game look similar to the best-looking SNES games, and the smooth animations make it very immersive. The character sprites are a bit too small, but after a while I got used to it - the action is too frantic and addictive for me to complain much anyway :) What deserves special mention is the realistic movements of ninjas - they will perform various acrobatic stunts that are reminiscent of Karateka and Prince of Persia games. Sound effects, like the graphics, fit the game perfectly. From the 'swoosh' of shurikens to the rustle of leaves, sounds in LOS add a lot to the atmosphere and lend a high level of polish.

The gameplay, which is where it counts, is near-perfect. The action is nonstop, and there are tons of cool things to discover. For example, you can 'upgrade' your shurikens by attacking white owls and collecting the items they leave behind. You can also collect hidden lamps that refill your health and add additional bars to it, like the potions in Prince of Persia. 'Boss' monsters at the end of every level are very well designed: they are both creative and much smarter than bosses in most freeware games I've seen. The game also has a point system for those who want to keep score.

As good as the game is, there are several glitches, none of which detracts from the fun. Sometimes the shurikens are too hard to distinguish from the surrounding foliage, and I noticed several graphical and collision anomalies. All in all, though, you will be having far too much fun to feel annoyed at these bugs. Easily one of the best Game Maker games I have ever played, Rubert "Darthlupi" Lupinek certainly outdid himself with this wonderful gem. From the lazily fluttering leaves in the opening scene to the ending climax, you will thoroughly have a great time. Highly recommended. 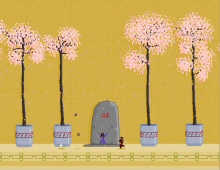 Legend of Shadow (a.k.a. Legend of Kage) screenshot

People who downloaded this game have also downloaded:
Ikari Warriors, Ikari Warriors II: Victory Road, Contra, Out of This World (a.k.a. Another World), Metroid Redemption