One of the most popular arcade games of its time, SNK's Ikari Warriors was a vertically-scrolling mission deep into hostile territory. Your mission: rescue General Alexander Bonn, C.I.F. US Forces in Central America, who has been seized by a band of revolutionaries and held captive in his own headquarters.Initially packing machine guns, you will play the Red or Blue warrior (or both, with a friend), and slog through wave after wave of enemy soldiers. One button fires bullets, another launches grenades, but both must resupplied every once in a while. Power-up weapons are also available, including even a controllable tank (a la 1982?s FrontLine, another arcade hit).

Enemies come in all types?soldiers, tanks, pillboxes, etc.?but also from every direction. To keep cool in the crossfire, Ikari Warriors gives players a rotary control on each joystick. With a twist on the joystick?s top, your warrior?s torso will spin around, ready to fire behind him while still running forward (kids, don't try this at home). This cool control method is replicated quite faithfully in Quicksilver's PC conversion, which was published by Data East in the US and Elite Systems in the UK. The action was unfortunately presented in limited 4-color CGA graphics due to hardward limitations of the time, but the smooth, furious action more than compensates for this.

Heavy on the action, Ikari Warriors became a favorite both in the arcades and on home consoles. To fuel that frenzy, SNK and Tradewest teamed up again for a sequel, Victory Road, released later that same year. This time, the Ikari Warriors take on more cosmic foes, battling rock-headed beasts, one-eyed green men and other odd creatures. Gameplay remained exactly the same, but the power-ups had changed along with the enemies. Once again, Quicksilver stepped up to the task of porting the action to the PC, and managed to retain the intuitiveness of the control scheme, as well as enhance graphical detail even with the same 4-color palette. Overall, both games are excellent conversions of the SNK arcade hits, and are solid precursors to the likes of Double Dragon and much better-looking Ikari III: The Rescue, which was done in all 16-color EGA glory. Highly recommended! 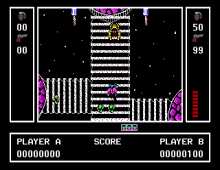