The Ikari Warriors series is mainly based on a game like Commando but this third game in the series has taken the game engine from a game like Double Dragon into the game as the game isn't about so much shooting but more hand combat against other enemy soldiers where only few of them actually have weapons.

This idea for a game is quite good in my opinion as you can very fast get bored of all the different shooting games so making it more a fighting game is interesting. Unfortunately the game is not running very smooth and it ends up with that you hit the SPACE key many times as you get the feeling that your character doesn't hit when you press the key. Despite this you can make up for this if you just click many times and it doesn't matter much since it is a fighting game after all.

The graphics are not very good and most of the things in the game are very "cartoonish" (especially tanks and helicopters). Meanwhile you also have to listen to a very annoying beeping sound that can't be turned (at least I didn't find out how to do it) and you really need to get used to it. Despite the quite good and different gameplay the game is still disappointing and especially the controls could have been improved a lot. But Ikari Warriors 3 is still one of the better action games and fans of this genre will most likely be surprised how addictive this game can.

Ikari Warriors III is a disappointing last game in Quicksilver's long line of above-average arcade conversions. It's not a bad game-- it's just dead average: nothing in the game is done very well, and there's nothing here to differentiate this game from a hundred other kick-and-punchers.

First, the meager plot: two guys, Paul and Vince, fight their way through several stages of action. The object, naturally, is to destroy everything that moves. Most levels are very similar, with the exception of a swimming level which is quite innovative and fun to play. Your weapons include your basic punches and kicks, along with some extra devices found along the way. Interestingly, you can keep continuing infinitely from where you died, a feature that beginners will be glad to hear.

Enemies all look the same, except for the bosses, who are usually bigger but sometimes even just look like normal enemies. Explosions are no better than any other game of this type, and the animation is average at best. An occassional cutscene at the end of a level is interesting, but not enough to save the game from mediocrity. Gameplay is very repetitious, as you can easily punch enemies who blindly charge at you. The only thing worth mentioning is that you can find barrels that kill all the enemies on screen at once, but then again, nothing spectacular. With very limited moves (only punch and kick), repetitive everything from enemies to levels, Ikari Warriors III is better left alone. B-O-R-I-N-G is what it is... a real dog, indeed.

Your men have been misleaded due false information from our enemie. Now you have to defeat the enemies! You can punch and kick and maybe a couple of other moves.

Action game in which you have to free some daughter of a bigperson in the jungle. Along the way you'll get better weapons and stuff. Nice topdown action game. 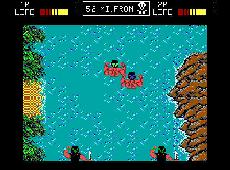 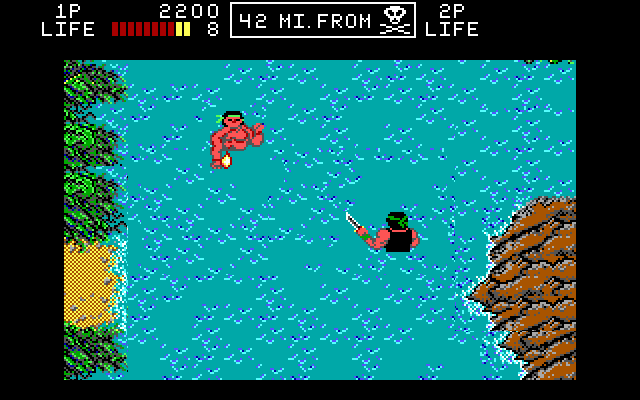