One of the best fangames I have ever come across, Codename: Gordon is a great-looking, addictive 2D side-scrolling platformer set in Valve's famous Half-Life universe. One testament of how good the game is is the fact that designers at Valve like the game so much they include the game in their Steam electronic distribution system. The game takes you through dozens of levels inspired by Half-Life and Half-Life 2, filled with aliens that HL fans will be familiar with. You are Gordon, the nerdy-looking, shotgun-toting reluctant scientist-hero from Half-Life, and this time insteading of uncovering a grand plot about mutants, your job - told by the first NPC met in the game - is to find out why exactly your world is now two-dimensional :)

The gameplay is standard 2D platformer play, with some physical puzzles (e.g. blasting or moving crates to create/uncover new paths) that are remarkably similar in spirit to Half-Life. The stumpy-head ("SD") style of graphics and very detailed backgrounds will remind action fans of Metal Slug series. The action is plentiful, and the number of weapons is as good as, if not better than, what you remember from Half-Life. The object manipulator is my favorite - it allows you to "grab" moveable things like crates and barrels and fling them - across much greater distances than bullets from most guns. Like Half-Life, you can also use non-weapon items such as flashlights, and regain lost health and armor points at health/energy stations. The control is effective: use the mouse to look up and down and target aliens, and use the keyboard to move around - with some caveats below. The diffculty level is just about right, as well: there is a good tutorial to teach you the basics, and the game gets progressively harder but never impossible.

As good as the game is, there are some quibbles that hamper the overall enjoyment. First of all, the control scheme takes some getting used to: while the combination of mouse and keyboard is easy to learn, it is awkward to use. Keys A and D are used to move left and right, and SPACEBAR to jump. This feels really uncomfortable - I would much rather use keys that are further away from the SPACEBAR, such as O and P, to move Gordon. Unfortunately, the game doesn't allow you to change keys, and so you simply have to tolerate this awkward control scheme for the whole game. Also, the system requirement is astonishingly steep for its kind: a 1.6 gigahertz (!) or faster processor is required. This is probably due to the fact that the game was coded in Macromedia Flash, which relies on software to render all graphics. Although this means you won't need a fast 3D graphics card to enjoy the game, I doubt how many 1.6Ghz and faster computers these days don't come equipped with a 3D card ;)

Despite quibbles and some bugs (I sometimes saw items I previously picked up when moving back to earlier scenes, although I could no longer pick them up), there is no denying Codename: Gordon is a superb fanmade game that does justice to the Half-Life name. Just be wary of the steep system requirements. Two thumbs up, way up! 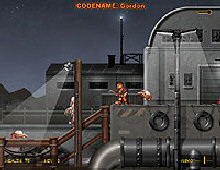