Sky Puppy is a great entry in Retro Remakes' One Switch Competition that deserves to finish in the top three, except it did not. Your goal: fly a puppy as high as possible before time runs out. The puppy flies by flapping his large ears - which you do by pressing SPACEBAR repeatedly. Being a one-key game, Sky Puppy does not let you use arrow keys to control the puppy's direction, but it lets you change direction in a clever way: when the puppy passes arrows, he will be 'blown' in the direction the arrow is pointing. And when the puppy lands on a platform, he will start walking in that direction until he hits a wall, in which case he will turn around and walk the opposite way. All the while, you have to collect as many bones as possible along the way to increase your score. The graphics is great to look at, the gameplay is addictive, and even the music is pleasant. Overall, a very well-made little coffee break gem that will put a smile on your face. 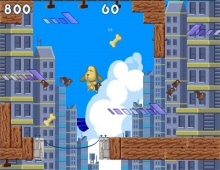