Stardust is an excellent arcade shoot 'em up that is the clone of classic Asteroids game, and the precursor of Housemarque's superior Super Stardust released years later. The premise is simple: shoot all the asteroids and other baddies in sight and avoid getting vaporized yourself into space dust. The interface is solid, and the gameplay is frantic enough to keep arcade fans happy for a while. Mindless, yes, but a lot of fun and pretty explosions besides ;) If you like this game, you will definitely love Super Stardust. 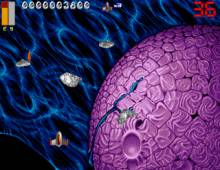