Sky Jaguar is an early classic vertical shooter from Konami, released only on some non-PC systems, including the short-lived MSX computer. The game is quite primitive by modern standards, with few level designs, types of enemies, and weapons to blast them with. However, the gameplay is what matters, and Sky Jaguar has all the qualities that characterize addictive shooters: user-friendly controls, fluid animations, and nonstop action. Although the game is by no means a watershed in the genre the way Raiden was, Sky Jaguar still packs enough punch to keep twitch fans entertained as long as it lasts. The game is also quite difficult, at least from my novice's eyes— the dividing rockets in particular are almost impossible to dodge once the screen is full of them. Highly recommended, at least as a piece of SHMUPS history. 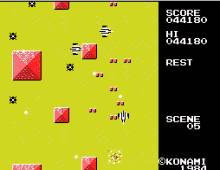