IFRIT is a fun 2D horizontal shooter from Japan in the same vein as R-Type and similar games, albeit a lot simpler. Polished anime graphics, decent soundtrack, and solid gameplay round out this well-designed freeware. The enemy ships are not very difficult because their shots (which look like small pellets) are slow-moving and easy to dodge. But the lack of challenge in this department is more than made up by the many obstacles you need to dodge throughout the game: from floating asteroids, to the ceilings and floors of a cave, to bubbling fire columns and beyond. The game has over 20 stages, making it much longer than an average shooter. But if you are very good at this kind of games, it will not take you that long to complete anyway, as each stage lasts only a few minutes. If you love R-Type, you will probably enjoy this similar game - although it plays more like a "poor man's version" of R-Type than an exciting game that brings it to the next level. 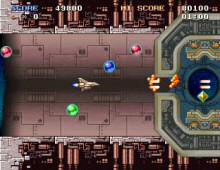