G-Darius is an excellent PC port of the great PlayStation game of the same name, developed by Taito and published by THQ in the U.S. in 1998. This PC version was ported and released only in Japan by Cyberfront Studios. A fun shooter that truly lives up to the legacy of Gradius series, G- Darius continues the theme and fun of Taito's venerable classic, turning the fun and challenge up a notch with more gameplay varieties than ever before.

Fans of Gradius or Darius Gaiden will be treated to gorgeous mix of 2D and 3D graphics: fully textured 3D ships against highly detailed 2D backdrops. There are many new ships, weapons, and power-ups; end-level 'boss' enemies are appropriately huge, menacing, and tough to kill. The game's best innovation is the addition of "capture balls" - a new kind of weapon you can shoot (with limited ammo) to capture enemy ships. Captured ships can be used as a weapon (with its firepower added to yours), a bomb, a shield, or a Super Laser. Depending on the kind of ship you capture, the captured ship can homing missiles, fireballs, lasers, or other weapons.

With excellent graphics, smooth gameplay that rivals the better-known PlayStation version, and innovations like the capture balls, G-Darius is a worthy successor to Gradius series, and a worthwhile old game to add to every shooter fan's collection. Highly recommended! 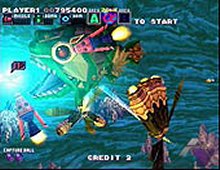