This is a faithful Windows 95 remake of Gradius I and II - two classic NES and Super NES shooters. Gradius I is still widely hailed as one of the best 8-bit shooters ever made, and it is easy to see why: both games are incredibly addictive, with a wide variety of missiles and other power-ups that set the standard for the genre. The end-level bosses are also tough to beat and only get tougher. Smooth graphics and rocking soundtrack round off these classics. 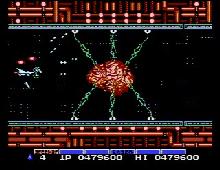