Darius Gaiden is an excellent albeit 5-years-late Windows conversion of Taito?s 1994 hit arcade shoot 'em up of the same name. The plot is inconsequential, but anyway: your objective is to take back the planet Darius from the alien forces. Satoshi Kunsai gushes excitedly in his review for MobyGames on why this game is a must-have for action fans:

"Ahhh...Darius. Sweet, sweet Darius. One of the finest SHMUP (short for shoot-em-up) series created, and coming from Taito (who has always made plenty of excellent shooters in the day), the Darius series has never wavered, never screwed up, and has always been a personal favorite of mine. Darius Gaiden, which originally appeared in arcades in 1994, and then later in 1996 on the Sega Saturn, and then once more for the PC in 1999 (and at this time, I'd like to personally thank Interplay greatly for picking up this title for U.S. release!) is in my opinion the best one of the series, right next to G-Darius and Super Darius CD (which appeared on the PSX and PC Engine CD, respectively). Read on to find out why.

First off, if you've played any Darius game before, you'll get the gist of Gaiden's gameplay. For those who haven't yet played a Darius game, here's how it all works. On the top of the screen, you have two bars which indicate the strength of both your shields and your missiles. By shooting various colored enemies, you can pick up different shields which either power up your missiles (green), your shields (blue), or your main lasers (red). When you grab a certain amount of any different Power-Up, one of the systems will upgrade. As an example: grab three green shields and your missile will power up a level. The main lasers power up a little differently in this game: instead of powering them up like your missiles and shields, every laser Power-Up you grab changes them. So you can go from a little pellet cannon with single shots to a triple shot with two Power-Ups, and the third will give you a double laser shot. However, when you die, you lose whatever Power-Ups you have obtained, but thankfully, you don't lose all your weapons; you just return back to the base power of everything you currently have.

Now that I've gotten the weapons system down, what about the difficulty and such? Well, the Darius games have NEVER been easy games to beat, and Darius Gaiden is no exception. Even with the difficulty set to Easy, you'd better still have a damn good set of eyes and a fast trigger finger to best this one. Thankfully, however, the game eases you into the higher difficulty settings by starting you out easy, and then working you into (eventually) harder and more challenging levels.

Now, onward to cosmetics...for those people who are just buy games for graphics, they're going to hate this. I'll give them a second to go find an entry for some crappy PC game with pretty flashy graphics and no substance. Are they all gone? Good! Darius Gaiden uses good old, 2D, hand-drawn sprites, but the graphics are still VERY damn good! Everything moves quickly and is drawn extremely well, and the effects...man oh man, the effects!! Scaling, twisting, warping, palette shifting, HUGE explosions!!!....it's all here, and I love it! One of the great things about seeing this game in both the arcades and on the Saturn was that it showed exactly what more powerful hardware could do to both enhance the graphics and the game, and this game is a prime example of it!? Okay, so go play it already. 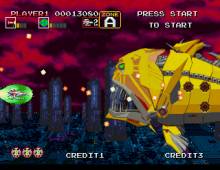