Flying Tigers 2 is a decent top-down shooter that is identical to its predecessor in every respect, except for new levels and enemies. If you have played the first game, you know what to expect: a vertical shooter set in the real world, with a myriad of enemy planes that look like clones of fighters from WW2. Fun for a while, but the lack of variety and power-ups push the game down to the barely above-average level. Smooth animations and good controls help, but not much. If you want a relatively easy shooter that you can while a few minutes with, then try Flying Tigers 2. Otherwise, it simply can't compete with other games in the genre, even fellow shareware games like Zone 66. 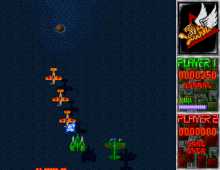