K1 Tank is an oldie but goodie first-person action game from South Korea. The game puts you behind the wheels of K1 tank, mainstay of South Korean army developed by Hyundai based on the design of the US Army's M1 tank. Although it looks like a simulation, K1 Tank is actually a straightforward first-person shooter similar to Accolade's Gunboat. There are two views possible: you can shoot the enemy tanks from inside the tank's cockpit, or handle the tank's rear anti-aircraft guns to down enemy helicopters. The gameplay is quite decent, but ultimately repetitive and shallow due to a lack of variety - every mission is essentially the same, only with different number of enemy units and some variations in terrain. In addition to being probably the world's only game to star the K1 tank, this was also the first ever South Korean game to be exported to Taiwan. 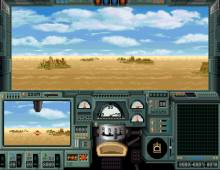