Hunt for The Red October, The

A fun action game based on the hit movie of the same name, Hunt for The Red October casts you as Jack Ryan, the CIA officer in the movie who suspects that the USSR submarine Red October is trying to defect to the U.S. Naturally, your job is to ensure that Red October makes it through angry USSR waters to the US homestretch unscathed.

Gameplay is divided into different "stages," each of which advances the plot and is a separate mini action sequence. At the beginning, for example, you must land on the Red October from your airborne approach via a parachute, without hitting the submarine. After this exciting prologue, the action shifts gear to a boring third-person platform perspective, where you pilot the Red October through mines-infested Russian waters. It then goes downhill from there-- almost every manner of action sequence you have seen in other games is utilized, although not effectively since the enemies are very repetitive, and level design is boring most of the time. A marginal old game that starts with a great promise that it can't fulfill. A real pity-- go watch the movie instead if you have never seen it-- it is the real old game here :) 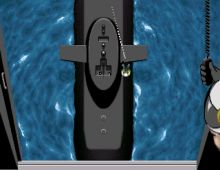 Hunt for The Red October, The screenshot