In this sequel to Home Alone Kevin McCallister has again lost his family, this time in New York City. Home Alone 2: Lost in New York, as with the first game, is a faithful adaptation of the hit movie of the same name into a platform game. As Kevin, you will run and jump through four levels as you avoid the criminals Harry and Marv, who return with a vengeance.

Although Kevin no longer has a chance to construct creative traps using household objects as in the first game, Home Alone 2 makes up for this deficiency with a lot of well-rendered and diverse locations: you will run through a hotel, Central Park, a townhouse, and bustling city streets. You will have a variety of weapons that are no less inventive than the first game, including a super somersault, a punch gun, and even trashcan covers to stall the two thugs. Unfortunately, the game is far too short and easy, and even the "difficult" setting won't be challenging enough for veteran gamers. Still, the powerful movie license, fun gameplay, and good graphics make it an enjoyable romp-- if only for a short time. 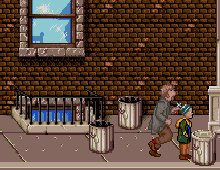