Home Alone is fun, for about an hour. Based on the movie of the same name, Home Alone puts you in the place of Kevin, a young boy accidentally left at home alone while his family is on holiday, and discovers that his house is about to be burgled by two nasty conniving yet bumbling crooks. Instead of calling the police like anyone else, Kevin decides to use everyday items (irons, tar etc.) to booby trap his house, thereby forcing the thieves to give up their attempt to rob the house.

You begin with an hour to arrange the house, and can pick up items and place them around the house where (if the items were placed correctly) they will cause intense pain to any thief who stumbles across it (like rolling pins above the door, marbles on the floor, etc). There's not actually a great deal of intellect involved in finishing this game, all of the items you can use are clearly marked, and the places where an item can go are also highlighted. Although you must figure out where an item must be placed to be effective, that's not too difficult, especially after a few tries.

The first few times you play the game, its great fun figuring out which traps to place where and how to lead the thieves through the traps without setting them off yourself. Yet once you figure this out, the game is ridiculously easy. The thieves just stumble along, walking blindly into any traps you set, and once you know how to set the traps there's really nothing left.

All in all, the game is great fun the first few times you play it (provided you're not upset by the older graphics), but is just good for a short distraction if you're stuck in the house one day. It certainly won't interest you for more than a day or two.

A fun platform game based on the hit movie of the same name, Home Alone casts you as 7-year-old Kevin who is left alone in the house as his parents absent-mindedly left for vacation. His immediate problem: 2 burly burglars who found their chance to break into the house. As Kevin, you must fight off the Wet Bandits as you protect your home.

Gameplay follows a fun two-pronged approach: while picking up valuables around the house so they don't get stolen, you must at the same time carefully lay traps for the bandits, using everyday items in the house. Those who have never seen Kevin's resourcefulness in the movie aren't at a disadvantage, however: items that you can use or pick up flashes on the screen, and are easily distinguishable from background graphics. You don't have much time left before the bandits break into the house, so the first few minutes are crucial to success. The game suffers somewhat from the save-and-restore syndrome, since it will likely take many deaths (well, actually kidnaps) before you figure out the bandit's movement patterns and find the optimal way to lay traps. However, the game's colorful, smooth graphics and the fun of figuring new uses for household items more than surpass this weakness.

Once you have collected enough items from an area, a key will appear that will let you enter the basement for the final sequence and hilarious endgame. Overall, Home Alone is definitely one of the better movie adaptations I've seen, and a refreshing break from Capstone's typical crappy games (but then again, they didn't develop the game themselves...) Recommended, especially to fans of the movie.

Home Alone 1 is a game based on the movie. You have to make your house ready for when the thieves are coming. You will need to do some stuff. Nice game. Try it! 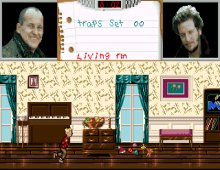 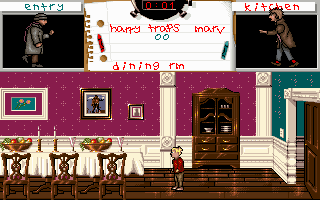