One of the most underrated action/adventure hybrids in recent memory, Monolith's Sanity: Aiken's Artifact is a fun and creative game that showcases how versatile the powerful LithTech engine (that powers No One Lives Forever) can be. Set in a very creative version of the 21st century, the game puts you in the shoes of Cain, an agent in the Department of National Psionic Control (DNPC), which is set up to investigate rogue-ish uses of psionic power. Pretty soon, you find yourself unraveling the mysteries of your own origin, as well as the origins of psionic powers themselves.

One thing Sanity has in abundance is character. As with No One Lives Forever, this game has style - and plenty of it. The voice talent of player character is provided by rapper Ice T, and is surprisingly good. Like most other "action games" from Monolith, the story is original, interesting, and ties together all the action sequences very well. Even though some portions of the game feel repetitive, the fun story will incentivize you to keep playing, just to see what happens in the end.

Similar to Crusader: No Remorse, the game is roughly mission-based: it goes to the next chapter once you finish a certain number of areas. You control the action from the bird's eye view + isometric angle, with freely-roving camera that lets you zoom in and out on impressively detailed 3D sets. While there is plenty of action - you will be able to use dozens of cool psionic powers, most of which resemble RPG-style spells - what sets Sanity apart from most 3D action games is the prolific use of puzzles. Your progress in the game depends upon completing alternating rounds of puzzles and fights. Puzzles, unfortunately (or perhaps fortunately for action fans) are very easy - far too easy to challenge adventure fans. If you think puzzles in Tomb Raider are easy, you will feel insulted when playing this game. Fortunately, most of the psionic powers you can use (called "talents" in the game) are cool enough to keep you playing, just to see what the new ones can do. Most chapters share the same structure: complete a puzzle, return to the central area, fight a few minions, complete another puzzle, and so on. The worst thing about this is that it makes the game extremely linear. Once you finish the game, there is no reason to go back.

One big quibble I have with Sanity is the inability to jump or climb. This means you will need to rely on the "Levitate" a lot, to overcome even lowly obstacles like a fence. But other than that, I find Sanity a creative and fun action/adventure hybrid that should appeal to gamers who can overlook its extreme easiness in favor of a coherent style and a creative plot. 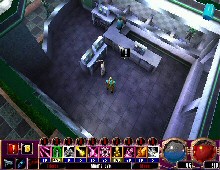