SandWarriors is a fun but very obscure 3D shooter from Astros, published by Gremlin in 1997. Although the game sports many innovations and fun gameplay, it was bogged down by poor frame rates on computers at that time (Pentium 60), and pales when compared to contemporary space shooters like Wing Commander III. Jason D'Aprile of CD Mag says it all in his concise review:

"SandWarriors tries to be something of a Wing Commander in the Egyptian desert of the future, but isn't likely to grab anyone in the way that Origin's space combat games do. And while it's not a bad title for what it is, this UK import looks and feels utterly outdated when compared to other current action-based flight sims.

The game centers around two warring factions, each worshipping a different Egyptian deity, that spend their days fighting each other for power. Aside from funny hats, desert locales and stylized Egyptian flight suits, the game doesn't really do much with its premise. Your mission commander seems more like he's from Arkansas than the Nile Basin, and the character you play sounds more like a kid from L.A than a warrior of this new Egypt.

The 24 missions included with the game are extremely difficult, as combat with multiple air and ground forces is the norm. While the game doesn't use 3D acceleration, it's still quite good looking, with well-implemented rolling terrain. One odd feature is hotkeys for specific aerial maneuvers, which are usually used when you need a special sort of evasion. There are also various low-resolution cinematic sequences throughout, and voice communications during the mission.

SandWarriors isn't a particularly heinous game by any means - it's just lacking any outstanding or even interesting qualities to make it stand out on the software shelves. Had it been released a year or two ago it might have been state of the art - today it's woefully outclassed by the competition." Outclassed though it may be, but if you are in the mood for a challenging shooter set in a unique environment, SandWarriors is still worth a look. 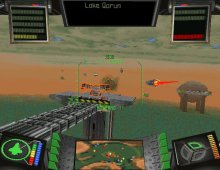