Best known for their Fatal Fury and Art of Fighting series, SNK has been one of the forefather of fighting games (along with Capcom, of course). As we know it today, SNK is the first to develop the Roll system and the Power system (yes, Capcom actually copied these system). In Samurai Spirits 2, they added new features, Weapons, and fatalities (Switch to Japanese mode and maximum POW to turn on the fatalities). The game offers fluid animation, lots of possible combos, and lots of action! It's a pity that this game never reached the shore of United States. IMO, this game is one of the best fighting games for PC. If you're a fan of fighting games, you are a fool if you don't try this one out! 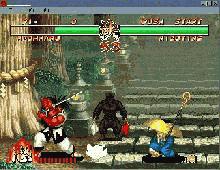