Samural Shodown VS MUGEN A competent fanmade fighting game based on characters from SNK's hit Samurai Shodown series (a.k.a. Samurai Spirit in the West), coded using the versatile M.U.G.E.N. fighting games engine. Although the game is very competently coded, with excellent character animations and music, it doesn't really add anything new to the familiar Samurai Shodown universe. Fans of the SNK classic will recognize most of the characters and their moves, and the levels in which the fights take place. This extreme faithfulness to the series makes Samurai Shodown VS MUGEN at best a nice Samurai Shodown clone that could have been much more (if, for example, the designers were to include more characters from other fighting game series, e.g. Street Fighter or King of Fighters). It's not a bad game by any means, but at the end of the day it's just a straight rip-off of the original classic that are much better anyway. Recommended, but only to die-hard fans of Samurai Shodown or anyone who wants to know what the characters feel like before buying the real thing ;) 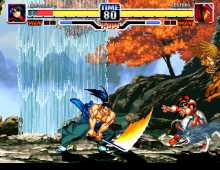