River City Ransom (a.k.a. Street Gangs in Europe) is one of the best beat 'em ups ever made for any system, although it is sadly neglected by many gamers due to the unfortunate circumstance of being released around the same time as Double Dragon, Technos' more over-hyped beat 'em up which ended up selling many times more than RCR despite being inferior in every way.

The game, released in Japan as Downtown Nekketsu Monogatari, is the second game in Technos? very popular beat ?em up series starring Kunio and Riki (Alex and Ryan in RCR), and is arguably the best in the series. The premise is mundane and not a little farfetched, but sets the stage for the mayhem that will follow. Slick, your nemesis, has kidnapped your girlfriend and held the entire city (yup) hostage with his gangs of evil crime bosses and students. In his ransom note he threatens you to meet his demands, but never really says what those demands were ;) Oh well, logic doesn?t really quite matter, because what you will get to do in this addictive gem is to beat Slick?s lackeys into pulp.

Although similar to Double Dragon in graphics style (2D side-scrolling) and gameplay, River City Ransom is superior in every way you can think of. The game has more moves, more enemies, more weapons, more gameplay variety, and tons of little nice touches that make the game entertaining every time you replay it. There are 9 gangs and 12 bosses in the game, each with their own personalities (and shirt color.. which is a must here because most of them look like clones of each other, thanks to the NES? limited palette ;)).

One of the best things about RCR is the amazing variety of items you can use as weapons and power-ups, which you can either collect on the level or buy in stores. Gang members and bosses drop the money after you beat them. In addition to traditional gang weapons like the two-by-fours, RCR allows you to use a lot of background objects in your fight. You can push people into pits, throw rocks and trash cans at them, and leap off of walls to perform powerful flying kicks. Power-up items are no less inventive: you can buy books like "Dragon Feet" and "Stone Hands" to make your attacks quicker, numerous food items to replenish or enhance your health (with names like ?Love Potion? and ?Karma Jolt?), and even relax in a sauna.

The game is linear in a sense that there is only one ending, but you can pretty much go anywhere you want in the game and beat up random people. This freedom, as well as the nearly unlimited gameplay variety, makes River City Ransom one of the best beat ?em up games ever made. PC gamers now have a chance to enjoy this console-only classic, thanks to NES emulators. 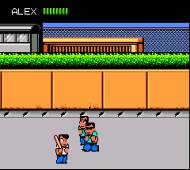