A lot of people compare this game to Amiga classic Rastan. Some say it's better, some disagree, but they all agree that this is a good game. Is it? If you are an action game lover + you played a lot of games on Amiga then you will probably like Risky Woods. Otherwise, this game might bore you soon.

This typical side scrolling game offers a lot of action. Your weapon in the beginning are throwing knifes but you can collect coins and buy better weapons later. Not much to say about this game, just kill anything you see, jump a lot and try to stay alive.

Risky Woods is a better-than-average side-scrolling platformer that is better known on the Amiga than PC. Your goal: rescue a guardian and kill all the enemies on each level to get to the next level. One nice feature is the larger-than-average character sprite, which allows a greater range of animations and detail, although it makes it difficult to get enough space between you and the monster before it hits you first, or enough time to react to their attacks.

The game is similar to Rastan in graphical style and gameplay, except here your default weapon are throwing knives, not a sword. Dead enemies drop coins, which you can collect to buy better weapons with - usually at shops near the end of each level. If you get killed, most of your loot is lost. Although it is a very straightforward hack 'n slash, there is a modicum of strategy involved in the use of coins: do you use them to replenish your energy, or save them in hopes of buing weapons down the road?

There are four worlds in the game, each with 2-3 levels. The graphics are very well drawn, the worlds well-designed, and the action very smooth and frantic (although I feel this is much easier than Dinamic's average game). The larger-than-average sprites can be frustrating as mentioned above, but that is a minor gripe. Originally programmed for the Amiga by Zeus Software, this PC version was converted by Spanish developer Dinamic Multimedia. Not as good as Rastan, but well worth finishing. 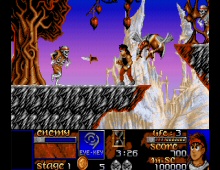 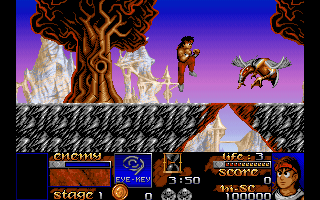