Released in 1993, Gunstar Heroes for the SEGA Genesis is an amazingly addictive and original platformer that ranks as one of the best games of its kind ever made for any system. Treasurefan's excellent review for the sadly unfinished Treasure fansite says it all about this Hall of Belated Fame entrant that every action gamer should experience:

"The legend goes back [that] in 1993 a group of Konami developers were fed up with making sequels and decided to abandon ship. They formed the company Treasure: A group of programmers dedicated to creating new, original content, with every game released. Their first game, Gunstar Heroes, had tons of hype surrounding it. Pictures showed a game that looked similar to Contra, but the characters had an anime inspired look. Ironically, Contra: The Alien Wars was one of the games rumored to have been developed by the newfound team. Gamefan magazine was hailing Gunstar as the definitive action game on any system, ever. Could the game live up to the hype? Gunstar, in my opinion, surpassed all the hyperbole and placed itself among an elite list of games that would be dominated by Treasure's future works of art.

Start off by choosing one of the four levels offered. The first is a standard forest level, which allows you time to come to grips with the control scheme (more on that later). The second is a classic mine-cart board, with a twist: a double tap of the jump button sent the cart soaring on to the ceiling. The third begins on a launch pad, and has you fight your way over, and up, the ship that is waiting to take off. The fourth is unique in that you must roll dice and try and make it around a game board. After each roll your character must face a boss, or complete a mini-game in order to continue. And you know damn well Treasure placed two "goes back to start boxes." All of the levels were exceptionally designed, but one sticks out in my mind because of its difficulty in the one player mode: the ship level. Way before Treasure re-defined the side-scrolling shooter with Bangai-O, they had you blasting your way through endless hordes of enemies, all the while controlling the ship and the gun pod that rotated around it; wasn't easy, but it sure was fun.

As was the case with most of Gunstar's attributes, the graphics were incredible for their time. Enemies, explosions, and mechanical monstrosities littered the screen, creating an intense, thumb-blistering experience, its no wonder many people voted it game of the year. However, Gunstar wasn't just a pretty face; the music moved the game along at a feverish pace. Now that I reflect on it, Gunstar had one of the finest soundtracks ever crafted for an action game.

Gunstar could have looked and sounded great, but without tight control, it all goes to waste. Thankfully this was not a problem. Gunstar Heroes control was so tight it could choke you. Your character could jump, slide and for lack of a better word, body-slam into enemies. Jumping, while shooting 360% into squads of enemy soldiers, and then body slamming the front end of their vehicles was common in the world of Gunstar.

Also common was fighting enormous, pattern-based, multi-jointed bosses. No one knew beasts of this magnitude could be created on the 16-bit SEGA system. They were so awe-inspiring, I believe many people may have died; too busy staring in disbelief to follow an enemy attack pattern of any kind. One in particular steals the show: While riding the mine cart, you're character is chased by a shape-shifting, robotic enemy, who changes forms as you damage him. One minute he's a tiger who uses his tail to fire lasers off the wall; then a massive handgun that fires bullets wherever your standing last; an robot who shoots a grappling hook at you while tossing chunks of scrap metal on top of you; then he switches into what can only be described as a gigantic crab with an attack pattern that will give you finger cramps on the hard setting. Amazing! Another memorable boss encounter had you fighting a muscle man on top of a propeller plane as it dipped back and forth. Treasure is arguably responsible for the fiercest final confrontations ever devised. I won't ruin it, experience it for yourself.

Gunstar Heroes is truly a rare achievement for the video game industry. Conquering it requires supreme twitch-action reflexes, memorization and balls out attitude. In other words you're a better gamer for having defeated it. Without question, Gunstar is a timeless treasure (couldn't help myself) that seems to get better with age, another rarity in the game industry. Treasure's first game certainly set a benchmark in the 2-D, action category: 9 years and still counting." 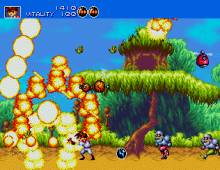