Guilty Gear X is a very interesting fighting game. It introduces plenty of new ideas to the genre, is the first high-res 2D fighting game ever released, and is probably the best 2D fighter outside of SNK and Capcom's games.

Now, the first thing anyone would notice would be the visuals. Guilty Gear X's visuals are downright amazing. It's incredible what high resolutions can do for hand-drawn visuals. The effects are excellent, the backgrounds are beautiful, and the characters look wonderful. The only complaint I have with GGX's visuals are the animations. While they aren't exactly lacking, they don't look quite as good as they could have. Still, this is easily one of the best looking 2D games ever released.

As one could expect, the sound isn't anything special. The effects sound as they should, with some exceptions (the air dash sounds very out of place). The synth-guitar music is pretty average, though it fits the game well.

Then we have the gameplay. Guilty Gear X is unique, to say the least. The new gameplay features introduced are interesting, and are a nice change of pace. First, you can build up your special gauge simply by moving foward. While that's nice, you actually lose your gauge if you don't make an advance. Next, there's the Roman Cancel. For the cost of half of the special gauge, you can press three buttons to cancel the recovery of most attacks, even after collision detection. This can lead to some very over-the-top combos. Of course, these aren't all of the unique features of GGX; some of the others include "Instant Block" (similar to Just Defending in Fatal Fury: Mark Of The Wolves), "Faultless Defense", and "Instant Kill". Yes, you heard right. It is possible to kill the opponent with a single attack. Thankfully, these usually only work against the most foolish opponents.

Overall, Guilty Gear X is a very impressive game. I wouldn't say it beats out Mark of the Wolves or Street Fighter 3: Third Strike, but it's easily worth a look, especially since good fighting games for PC are few and far between. This rare English PC version was ported from the better-known PlayStation version by Cyberfront Studios. 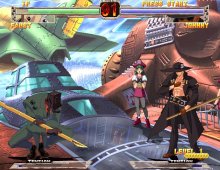