Rick Dangerous is back in his fight against the evil. This time it's the aliens that threaten Earth. 5 levels of pure platform fun. One of true legends of old C-64 and Amiga in it's PC version.

Rick Dangerous, Superhero, back in Action! A legendary Jump 'n Run this one - one of the best games of this genre made up to the time it came out - and for quite a long while after that. Very nice graphics combined with some 5 intelligent designed worlds make this one just a good game. Though I've never been one of the biggest Jump 'n Run-Fans this game made me sit before my old Amiga for hours back then. And when I found it some days ago I was hooked againg. Set in a B-Movie-World with some atmospheric cut-scenes between the levels - it's a game in which you feel that it was made not only to be a good game, but also to look good and provide lots of fun. Timeless classic!

Nice follow-up to Rick Dangerous, this time more akin to old aliens-invade-the-Earth movies than to Indiana Jones, but gameplay retains the same addictive action/puzzle blend of the original. After the archaeological antics of Rick's first outing, he returns home to London.... only to find that entire city is being attacked by aliens. Determined to save the day once again, Rick soon climbs the stairs that lead into the bowels of the alien mothership....

Although the levels are no more archeological digs, gameplay remains the same. Rick starts the game equipped with a ray-gun (limited shots) and several electronic detonators (also limited), both of which can be used to triggering and neutralising traps as well as blasting aliens. While aliens are easily spotted and terminated, traps are what makes the game very devious and sets it apart from other platformers. Lasers built into the walls are hard to find and avoid. You must also pay attention to various switches and levers that are scattered throughout each level. These activate lifts, guns, and various other alien equipment that will help your quest. The game takes you across five levels, from the interior of a spaceship to the alien planet and beyond. Unlike the first game, you can now play the levels in any order - but you have to complete all of them to get to the fifth and last level. The cartoony graphics are outstanding throughout, although they are (of course) duller than the Amiga original.

One major gripe I have with the game is that it seems luck is more important than judgment for many puzzles, where trial-and-error is the only way to figure out how to escape the scene. You will likely die many times (especially after level 2) from pushing the wrong thing at the wrong time. Despite frustrating deaths, though, you still want to keep playing, because Rick Dangerous 2 is chock-full of that "just one more try" quality that all classic games share. If you like the original and want more of the same, Rick Dangerous 2 won't disappoint, although be warned: it's not a little tougher than it's predecessor. A must-have!

London 1945, Rick returns home to rest, after thwarting enemy plans to destroy London, all is not well however. A mysterious fleet of strange Alien spaceships have beseiged the captial, back in a flash and as dangerous as ever Rick heads for Hyde park, the landing site of the strange alien craft. Rick is indeed back in the sequel to the hugely popular platform game by Core design, the story above is just the start of Ricks troubles as he must complete and fight his way through 4 stages riddled with laser beams and creatures that want him dead...it's going to be a tough one. 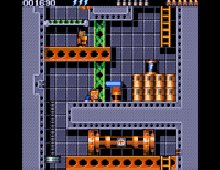