A great value for money that includes two classic action/puzzle games: a remake of 1989's Bubble Bobble, and its sequel Rainbow Islands. For those who aren't familiar with the original, Bubble Bobble is a classic arcade game which star two bubble dragons. You must first trap the baddies in bubbles, then pop them quickly before they escape and become faster.

The sequel, Rainbow Islands, is similar in concept to the original, although it's a one player-only game, and you create rainbows instead of bubbles. This time, bubble dragons Bub and Bob must go through seven worlds to discover the true meaning of life (uh-huh). The game's highlight is the rainbow, which has multiple uses. You can shoot a rainbow at an enemy, you can trap it inside, or you can drop a rainbow on it from the air. If a rainbow hits a baddie when fired, it becomes a fruit or powerup. If a rainbow is landed on, the rainbow falls and anything it hits becomes a diamond or powerup. If a rainbow is bounced on, it serves as a platform. The tip of the rainbow is a star, and any hidden item the star touches becomes revealed. A lot of fun to play, although somehow Rainbow Islands doesn't have the same simplistic, elegant charm as its predecessor. Both are very good action/puzzle games that are must-haves for everyone who likes addictive, charming action. I highly recommend the Windows front end file (runnerv1.zip) from Rainbow Islands page at Taito Overclocked website -- it makes the game much easier to play on Windows 95/98 systems. 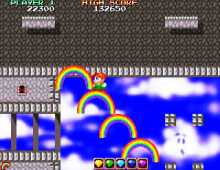