Bubble Bobble. Is there anyone that has never heard of those two cute little dinosaurs? Well, if You haven't - be ashamed! Those two little guys are responsible for many divorces, unhappy parents, bad grades in school, Persian gulf war (heh, just kidding)... One of the most famous platforms ever. Jump, run, make bubbles and trap those filthy beasts before You destroy them...on 100 levels!

One of the true classics. Bubble Bobble has gone from success to success on various computer system including the Amiga, Commodore 64 and regular arcade play machines and now in the regular PC's with this version from Novalogic. Like seen in the other versions of the game you control a little dinosaur character and you have to collect different fruit and other things while you are capturing ghosts and other monsters with your bubbles. Once they are captured you have to blow the bubbles and when you have captured all monsters you have completed the level.

It does sound simple and so it is. That is also why the game has gotten so popular as it has in my opinion. The gameplay might not be complicated by you sure as hell get addicted to the game. While you play you may think that you just have to complete a few more levels but then you notice that you are still playing 1 hour later. You can also play the game as two players and the second player can enter the game at anytime - even at the last level if you think that could be funny. The game will get a bit easier when you are two players since you will be on the same team unlike many other games. But playing together instead of against each was more popular in the 80's so that is most likely the reason with Bubble Bobble.

When you play you can also collect other things such as items that makes you move faster (with this you can complete pretty much any level without problems as long as you have played the game for a while) and also an item so you can blow bubbles faster and longer. This can be quite effective if you just stand at a quite safe place. Bubble Bobble is one great game and unless you only have a very specific game taste you can also use a little time on a game like Bubble Bobble because it requires so little attention to begin with. Both the graphics and sound are not as impressive since it's simply converted to the PC system with EGA graphics. If it had been VGA it would have been really great. But the great gameplay is still in this PC version so don't hesitate to play this game.

One of the most popular arcade games ever made, Taito's Bubble Bobble tells a story of Bub and Bob, two friends who are changed into bubble dragons, and must save their girlfriends from a super baddie named Hyper Drunk. Gameplay, like all good arcade games, is easy to learn: you (and your friend in a 2-player game) blow bubbles to capture baddies, then quickly pop them. When the bubbles are popped, fruit comes out for you to collect (and compete against your friend for points). The game is very simple in concept, but incredibly addictive due to spotless controls, quirky levels, bosses, and monsters, and overall fun. I remember playing this games for hours, thinking "just one more level before I go to bed" -- and next thing I know, it's wee hours of the next day.

This PC version done by NovaLogic is an excellent conversion of the original, although of course the graphics are reduced to EGA only. With a truly classic design, it's no wonder that Bubble Bobble is alive and well: there have been many sequels and spin-offs, although none for the PC except for the excellent 1996 remake, also on this site. A must-have!

Bubble Bobble is about Bub and Bob, two adorable little bubble dragons/dinosaurs. Of course they weren't always bubble dragonsaurs, they were turned that way by naughty wizards. Bub and Bob's girlfriends have been taken, and in this game they must rescue them from the baddie, who is called Hyper Drunk (yes, strange I know). In order to do this, they have to travel through 100 levels to the underground.

Each level has enemies, and the trick is to trap them in the bubbles. When you get them trapped in the bubble the bubbles float up, then you run and pop the bubbles. When the bubbles are popped out comes fruit and other assorted items which you collect in order to increase your score. This isn't the entire game though, as when you get up to the higher levels, the enemies get faster and smarter, and also increase in numbers. There are bonuses to collect, that can increase your bubble shooting speed etc, and also letters. If you spell certain words you can gain an extra life etc.

Bubble Bobble had great graphics. Totally cute! Bub and Bob are cute little dragonsaurs, and even the enemies are cute. It's a cool looking game, very appealing to the eye. Bubble Bobble certainly has that ol' arcade charm. The Bubble Bobble tune can get on your nerves, as it's the same tune throughout the game. But, if you love the tune like I do, then you shouldn't have any problems.

Ever seen a dragon eat soap? Neither have I, but the effect seems to be visible in Bubble Bobble. Two cute dragons, one of which you can control (or both in two player mode) blow colorful bubbles at equally colorful enemies. Most of the time these enemies resemble random doodlings. Your object is to capture them inside bubbles and then pop them. When you burst a bubble with an enemy trapped inside, it turns into a piece of fruit that you can eat for extra points. The goal of each level is to bubble all enemies and pop them.

Gameplay is self-explanatory. Let your three-year-old nephew try this game, and he'll be able to play it within five minutes, only having trouble understanding that he should capture the enemy in a bubble first, then jump at it. You just use the arrow keys and the Alt key, although you can always remap the keys to suit your needs. Nothing fancy, nothing complicated. It's just like those one-buttoned joysticks from back in the days.

As for the story... well, to be frank, does it need one? Beat this game and there'll be a certain someone who won't have left his computer for days. This game is just a fun way to pass some time, trying to get as many points as you can while enjoying the fun, colorful look of the game and the cuteness of the characters. Any attempt at a story would only make the game less fun, as it would get in the way of playing. Bubble Bobble is perfect for killing half an hour of lunchbreak and being carefree for that time. 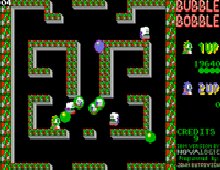 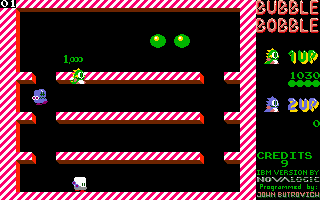