One of the worst games from Probe/Acclaim, Revolution X is a downright horrendous game that is even worse than the original coin-op version. Only fans Aerosmith may enjoy this one - and they will probably delete it after the first few minutes, too.

The plot is simple: you are a gun-toting Aerosmith fan (a lot of you out there, I'm sure), and you're out to save the band from the clutches of Helga, a big-breasted Eurotrash chick bent on taking the minds of children and torturing them with goodness. Backing her up is the New Order Nation, a fleet of bumblebee-dressed gunmen out to destroy whoever disagrees with the program. Bad enough? Gameplay is even worse.... read on.

For a start, the graphics are pixellated to the point of breaking up (and it doesn't look much better on console systems, either). Control is disastrous, thanks in part to the slowdown on the screen. Of course, being Acclaim, you are forced to control a little pair of crosshairs and open fire (if you can) on the onslaught of evil. And when I said "onslaught" I really mean it - these guys keep coming, and after killing the first few dozen of them it becomes more torturous than fun.

There are secrets in the game which make it (a tiny bit) better. If you locate the hidden band members (e.g. your guitarist is in the john, and Steven Tyler is on the rafters necking with a blonde- I'm not making this up), you get a special ending where you can trash their trophies. Aren't we lucky.

Perhaps the only saving grace, in-game music consists of (what else?) Aerosmith tunes that are looped ad nauseum. The sound effects, on the other hand, are sorely lacking: just the annoying "poom pa-doom poom" sounds over and over. The bottom line: this is just about as bad as an arcade game can get. Take my advice, and stay far away from this one. Is it my imagination, or is every game that features rock stars really suck? This one is a Real Dog, without a doubt. 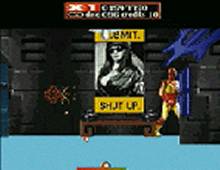