Return of Egypt is a very good Castlevania clone from Driven Phantom Soft, sporting fluid 2D sidescrolling action, plenty of well-drawn enemies, and excellent level design. You star Moses as he returns to Egypt to battle various undeads and even Egyptian gods. Similar to the hero in Castlevania, Moses wields a whip in this game as his default weapon. The castle is very well-designed, full of traps, optional routes, and secret rooms. Similar to most console platformers, you cannot save at any point in the game, but only at "save points" - which are conveniently placed every few rooms apart. One thing I like is the number of "special skills" and magic spells you will acquire as you play through the game, usually after beating each "boss" monster. Examples of these skills are rapid run and magical storm. Casting spells require magic points (MPs), so use them sparingly. Plenty of action, surprises, and smooth gameplay make this game the best Castlevania clone I have ever seen - and one of the best platformers in general. If you like this one, also try Dracula by the same author who is apparently a big Konami fan. 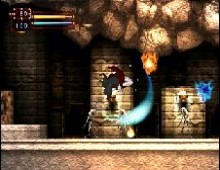