Resolution 101 is a standard 3D action fare set in future New York city. The plot is novel enough: you are a criminal who is promised freedom if you help the authorities eliminate other criminals from the streets. In order to do this you must take to the streets in your hover-car and use your radar to track down and destroy the hover-car of a designated criminals (one question will pop in your mind: if the bad guys show on radars, why don't the police arrest them?). After you destroy the opponent's car, you will receive your reward and move on to more difficult missions (i.e. more bad guys at a time). The simple 3D polygonal world is very smooth, but not spectacular. The repetitive gameplay soon wears thin, however, and you'll likely switch this off to play something better, like Bethesda's The Terminator or The Punisher. There's nothing technically wrong with Resolution 101 -- it's a smooth and well executed game. Just very, very dull. 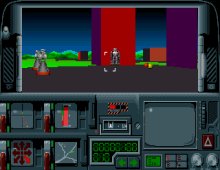 People who downloaded this game have also downloaded:
Metal Gear Solid, House of the Dead 2, The, Iron & Blood - Warriors of Ravenloft, Killing Time, Simpsons: Bart's House of Weirdness, The