Iron & Blood - Warriors of Ravenloft is a case study of a great idea mired by horrendous execution. The premise is simple but very innovative: here is a 3D one-on-one fighting game with characters from TSR's popular Ravenloft role-playing universe (now owned by Sword & Sorcery). Like AD&D RPGs, characters in this game has a number of statistics, and can equip artifacts, cast spells, quaff potions, form parties for team campaign mode, and grow experience. There are many fantasy creatures you can control, including an executioner, a dwarf, a goblin, and many more. The plot is also interesting, particularly as it changes depending on whether you control a 'good' or 'bad' character. The story centers around a fight between Lord Soth, a phantom knight, and Count Strahd, a vampire. Instead of wasting time to fight each other, the two nemesis shrewdly send their warriors and servants into deadly combat.

Unfortunately, this neat promise is completely ruined by bad gameplay. Originally a bad Playstation game, this PC version is even worse. For starters, the controls are some of the worst I have ever seen in a fighting game. To perform a special move, you often have to use ALL the keypad keys PLUS the backslash, and even more keys for combos. This is so ridiculously hard to do that I think the only way to beat this game is to train an 8-arm octopus to use the computer. The joypad controls are no better: keys were designed to be pressed in the most uncomfortable way, and there is no way to reconfigure anything. Also, you will see most of the action from a third-person, behind-the-back view - which is next to useless because you can't see what the enemy is doing. To add insult to the injury, the characters are pixellated and the animation very jerky. Anyone used to the smooth polygonal characters of Virtua Fighter or Tekken will delete this game in disgust.

So, does the game has any redeeming features? There are in fact several innovations, all of which are buried beneath bad gameplay. You can supposedly use over 250 combat moves and spells, but you won't likely see close to half that amount due to horrendous controls. You can also choose over 60 weapons and artifacts, and choose your alignment. The team campaign mode is also quite interesting. In addition to the usual VS and training modes, you can choose a team of 3 characters among 16 available characters (8 from each side). Your team must then fight a lot of enemies to gain all of the artifacts. As you win battles in this mode, your team will gain better strength and arcade power.

Although it had a lot of potential as the PC's first fighting game based on AD&D license, Iron & Blood managed to squander that opportunity with horrible gameplay and unreliable graphics. Fighting and RPG fans alike will have to wait for a game that uses the concept more effectively. 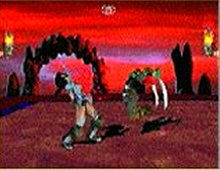