Spider-Man & Venom: Separation Anxiety is the sequel of Maximum Carnage, one of the best superhero action games ever made. Unfortunately Maximum Carnage was never released on PC, so PC gamers will have to take comfort in the fact that while Separation Anxiety is inferior to its predecessor in every aspect, it is still a much better game than many other beat'em ups in the market.

Much like its predecessor, Separation Anxiety places you in control of either Spider-Man or Venom, a criminal vigilante who possesses Spider-Man's powers and even greater strength. Both characters have different strengths and attack moves. Spider-Man is faster and more agile than Venom, and his special "power-moves" include a grab-and-kick move and a tornado kick. Venom is stronger, but slower than Spider-Man. His power-moves include a powerful uppercut and pounding the ground to hurt everyone in the vicinity. Two player can play both characters simultaneously - which means the plot has been devised to justify the superhero working alongside the villain: both of them must co-operate to stop the alien symbiotes from creating an unstoppable army.

The levels are quite bland, with none of the nifty variety of Maximum Carnage (such as the rooftop scenes). The variety of enemies is similarly disappointing: you'll run into a maximum of only 2-3 enemy types per level. The characters also look blurry and not very well animated - this PC version looks even worse than the Genesis/SNES version.

Overall, Separation Anxiety is worth playing only if you're a die-hard fan of Spider-Man. I recommend you stay clear of this average old game and play the vastly superior and much more atmospheric Maximum Carnage on SNES emulator instead. 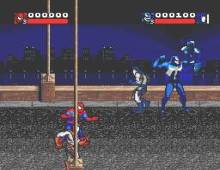 People who downloaded this game have also downloaded:
Spider-Man and Captain America in: Dr. Doom's Revenge, Teenage Mutant Ninja Turtles, X-Men 2: The Fall of the Mutants, Spiderman, X-Men: Children of The Atom