Touted (incorrectly) by Paragon as "the world's first interactive comic book," this is a fun side-scrolling action game featuring none other than Spider-Man and Captain America. Use their superpowers in over 30 battles to stop the fearsome Dr. Doom and his villains from blowing up New York City. Aside from good gameplay, the game also came with a nice limited edition comic book. 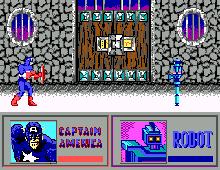 People who downloaded this game have also downloaded:
Spider-Man & Venom: Separation Anxiety, X-Men 2: The Fall of the Mutants, X-Men: Madness in The Murderworld, Spiderman, X-Men: Children of The Atom