Killing Time is a fun FPS that deserves much more attention than it received in the market. This interesting DOOM clone puts you on a journey in search for answers as to what happened one summer evening in 1932 to an Egyptology professor Dr. Hardrove who disappeared in Northern Africa during his search for a mystical water clock from the dynasty of the Pharaoh Ramses. Hardrove's trail has led you to a mysterious, deserted Tess Conway's Island Estate.

The game plays similar to the classic Alone in the Dark games, but with more emphasis on action. In addition to weapons (including a .45 Caliber Nickel-Plated Colt "Peacemaker" Revolver you start out with, as well as a Remington 12 Gauge Pump shotgun, a Thompson .45 Caliber sub-machine gun, and a Kleinschmidt flamethrower), there are many objects to be found throughout the Estate, which you automatically pick up by walking over them. The Estate has many locked doors, and finding the required keys is important -- much like the color-coded keycards in DOOM. One of the objects you can picked up is "the Winged Vessel," which will provide you with special abilities that are required for reaching specific areas in the game. Once they run dry, you will be able to rejuvenate them by picking up a special white rejuvenation vessel. The ability to refill the vessels makes them similar to spells in RPGs, and a very handy thing to have.

There are sixteen different types of enemies in the game, including ducks (yes, ducks), hunters, flying heads, evil cooks, crazy clowns, ugly rats, smoking skeletons, and many others. The Estate is huge, and with hundreds rooms of monsters, it would take even the most experienced player quite some time to finish. A map is available while playing the game to get a bird's eye view of your immediate surroundings. By pressing P on the control pad, you'll see your score, the name of the area you are in and what percentage of that area you have explored, along with any walls, doors, objects and columns on the map.

The fully textured 3D graphics in Killing Time are more than adequate, although they of course can't compare to newer 3D-accelerated games. You can move left and right, look up and down (even while walking), and make 180 degree turns via an intuitive user interface. Overall, I found Killing Time a nice diversion from more "hard core" first-person shooters. With a unique setting in a horror genre, some interesting plot twists, and a newbie-friendly gameplay that isn't too overwhemingly difficult, Killing Time is well worth a look for FPS fans, especially anyone who likes Alone in the Dark or more recent Cliff Barker's Undying. 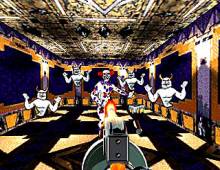