Based on the movie of the same name, Night Breed: Action game is the first of the planned Night Breed trilogy which was never completed due to bad sale rates.

You play as Boone, the main character of the movie. You will have multiple goals and after you complete each you will be rewarded by a short movie that will tell you what to do next. The game itself takes place on the graveyard populated by many monsters and Nazi soldiers and fighting them can be a hard task.

Night breed is nothing special, but it's a good mixture of puzzle and action game that movie fans should definitely play. The rest of you... Well, give it a shot.

First in a slated trilogy of games based on a cult classic movie of the same name, Nightbreed is a first-person action game that stars you as Boone, the hapless hero in the movie. Although the game is a standard shoot-everything-in-sight fare, it borrows some adventure-game elements and integrate them into the game quite well.

As Boone, you have a handful of tasks to complete. First, you've got to collect the three keys to Midian, one located on each level, which will involve defeating or avoiding lots of Sons Of The Free and an equal number of hostile Nightbreed. You've also got to free the Beserkers, a bunch of homicidal and totally uncontrollable 'breed normally kept locked up in the dungeons of Midian, then get baptised by Baphomet (the living god of the Nightbreed), free the 'breed from getting trapped underground and kill The Mask to rescue your girlfriend Lori. Phew. The game will give you a task (for instance, finding Baphomet and getting baptised), then, when you achieve it, giving you a dinky little animated reward sequence which tells you what you have to do next. This is a nice touch, and a far cry from many other mission-oriented action games where you're not sure what to do.

It's quite difficult for anyone to depict the rollercoaster, plot-twisting effect of a film like this in a computer game, but OCEAN managed to do that quite well. The game initially takes place in the graveyard that lies above Midian. It's, say, five or six screens wide, but three or four deep as well - you move into the nearer or further row of screens by walking backwards or forwards through the various arches you find littered around the place. Wander round these enough (fighting or avoiding men and Nightbreed as you go) and you'll eventually come across one of the ways down into Midian, which is laid out in the same sort of way. Drop further down again, and you'll come into lower levels of Midian yet.

Once you get the hang of the controls and figure out how to use the Passkeys (inscribed tokens which let you into various areas of the game), you'll find that Boone has a good number of moves he can use (kicks, punches, jumps, use of a gun should he find one etc) and the baddies, especially the weirder 'breed, are of suitably bizarre design, if occasionally a bit big and static.

This is a game that looks like a lot of time and effort has gone into it. Despite the "campy" effect (no doubt made by those blocky monsters that are more funny to watch than scary), the game is actually rather clever. It combines some puzzle-solving with standard shoot-em-up, and the result is a more satisfying use of the license than OCEAN's earlier efforts. Not a Top Dog by any means, but one of the better action/adventure from OCEAN you'll likely find. Recommended, especially to fans of the movie. 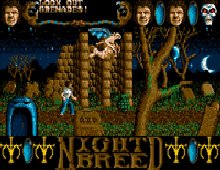 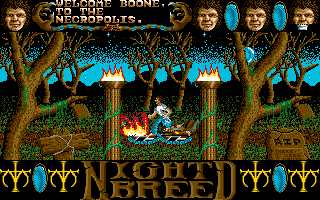