Pushe Pushe is a decent one-screen platform game that plays like a cross between Super Mario and Bubble Bobble, although not nearly as fun as either. You basically control a boy hero as he jumps around each level, avoiding enemies and killing them. There is not much to say about the game, except that you will probably find the game fun for the first 10-15 minutes or so... until you realize how much better Taito's classic Bubble Bobble is, and go back to that classic instead. In the game's defense, the number of levels is much higher than a typical one-screen platformer, and there are dozens of enemy types and terrain. It's just too bad most people won't be motivated enough to see all of them. All in all, a thoroughly average game that you could do without. 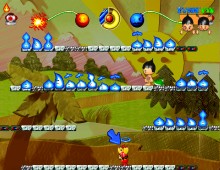