PacWars 2 is a fun multiplayer action game inspired by PacWars, a classic network action game released by Iain Syme in 1991. PacWars2 improves upon the original in many ways by adding better graphics, dozens more weapons and power-ups, excellent play-via-Internet support (TCP/IP), and a versatile map editor for creating your own levels.

The game is best described as Pac-Man meets Worms. You basically control a Pac soldier of your choice (including even Ms. Pac-Man!) as he/she runs around the board, trying to kill all other Pac soldiers. The action is fast and fun, although the graphics could be better animated - right now the Pacs look a bit too much like 2D paper-cutout dolls. That's a minor nitpick compared to the fun multiplayer action, though. The game is under constant development, so keep checking the official site for new versions that will hopefully make this fun game even better.

Note: The download here is for Windows 95 and up. 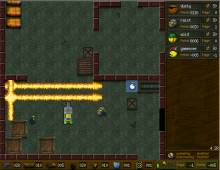