Prototype is a great-looking but little-known horizontal shooter from NEO Software. The game boasts excellent multi-parallax scrolling graphics with amazing illusion of depth. There are 8 levels and hundreds of enemies to attack. One of the game's strengths is that the number and pattern of enemies change from game to game, which give the game an excellent replay value since no two game will be exactly the same.

On the downside, the enemies - especially end-level "bosses" - are neither as imaginative or challenging as h-shooter classics. The range of weapons you have is also a bit too limited, with many weapons being just small variations of the standard gun. Still, the excellent production value, smooth animations, and even an outstanding soundtrack (over 30 minutes of original music) makes this old game far above your average shooter. Recommended for action fans, especially those who like graphical details in the scenery. 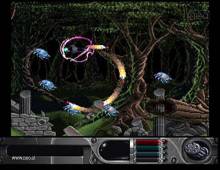