Powerslave is a fun and innovative first-person shooter whose excellent graphics and level design are unfortunately overshadowed by serious interface problems and bugs (which are probably related to the fact that the game was converted to PC from the original PlayStation version). The premise is quite promising, and is a far cry from "shoot aliens, save Earth" plots of most first-person shooters. You play a covert operations specialist who's been ferried into the Egyptian city of Karnak to find out who or what has sealed off the town from the rest of the world. The only information you have is from a villager who somehow managed to escape: before he died, he said someone had invaded the city, stolen the mummy of the Pharoah Ramses, and was attempting to bring him back to life. The intruders are also embalming and mummifying live villagers to keep the populace in line....

For a 3D shoot-'em-up, Powerslave offers a couple of nice twists. Similar to another old game Strife, some areas aren't accessible unless you push objects around, either revealing new doorways or providing a stepping stone to jump over a wall. Because there are several places where you have to perform some accurate leaps, the inclusion of a third-person perspective can be a big help in calculating jumps. In addition to real-world weapons such as an M-60 machine gun, hand grenades, and a flamethrower, you can also use a slew of magical items that do everything from making you invincible to replenishing your life meter. These magical items add depth to gameplay because you have to decide what to use and when to use it, not to mention collecting enough "magical essence" to enable you to unleash powerful spells similar to Shadowcaster. The training mode allows you to get used to the interface and various commands without worrying about enemies.

Powerslave also boasts excellent graphics that far surpass your average Quake clones. The enemies are nicely textured and shaded, and pixellation is minimal. The level with the giant Sphinx in particular almost evokes the same breaktaking "wow" effect of the last level in the first Tomb Raider game.

Despite all its strengths, Powerslave has a few glaring errors that prevent it from being a Quake contender. Probably the most annoying is the game's terrible save-game feature, which reveals its PlayStation's origins. Instead of being able to save a game at any point during play, you have to give a new game a name and then save it at certain points within each level; your progress is automatically saved at the end of a level. What this means is that if you quit and load a saved game, you're forced to start at the beginning of a level regardless of how far you progressed in that level the last time you played. Two other unforgivable omissions in the game are the complete lack of joystick or gamepad support (yes, it's keyboard or else), and lack of an "always run" button that is common feature in most first-person shooters. Strafing is also painfully slow, and the weapons (numbering only seven) are all quite mundane.

All in all, though, Powerslave's solid level design, interesing plot, and puzzle elements (even if it's mostly just "how do I get from point A to B" variety) makes it a refreshing break from numerous Quake clones. If you hate first-person shooters in general, there's nothing here that will make you change your mind. For fans of the genre, though, Powerslave is highly recommended. 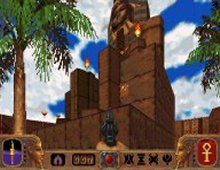