More of less a "beta version" of If It Moves, Shoot It!, Phantom Fighter is a one-year-older vertical shooter from Emerald Software that is identical to the better-known IIM,SI game in every respect, except for the lack of VGA mode and (as far as I can tell) a tougher difficulty level. This is the rare PC conversion of the Commodore and Amiga game of the same name, which is also not much different from their respective versions of IIM,SI. So before you ask "why is this even here, then?" - one of the more interesting examples of when game companies decide to publish a game, then an "enhanced" version with 99% identical gameplay under a different name. If you like shooters, check out the superior If It Moves, Shoot It! instead of this 'prequel' that is of interest to die-hard collectors and completists only. 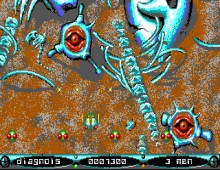